In 2009, I was invited by Scheltema Complex in the Spring and Summer of 2009 to take part in the program Utopische Nest/ Smaakmakend Scheltema, to commemorate the presence of the Pilgrim Fathers in Leiden 400 years ago. Commissioned by Scheltema, with support from Stichting Doen and Museum De Lakenhal, Leiden, I proposed linking the persecution and flight of the Pilgrims with the situation of present day asylum seekers and migrants, to examine both the parallels and differences between their dangerous journeys. For the project, I visited Sicily and the Italian island of Lampedusa, where many migrants make their first arrival in Europe, to talk with some of the people about their stories, and explore the region.

The story of the Pilgrims is iconic; on being persecuted in England for their religious beliefs they were forced to flee, and in doing so became the symbolic founders of the United States. Before their flight across the Atlantic, they were granted asylum in Holland, at that time one of the most, if not the most, tolerant countries in the world, where they stayed for 11 years before finally sailing to North America in 1620.

Present day asylum seekers and migrants now embark on as perilous and uncertain a journey as the Pilgrims, often using small, leaky rubber boats to cross the Mediterranean to Europe from Africa. The Red Cross estimated that in 2008, 1 in 5 people do not survive the journey over the sea from Africa. 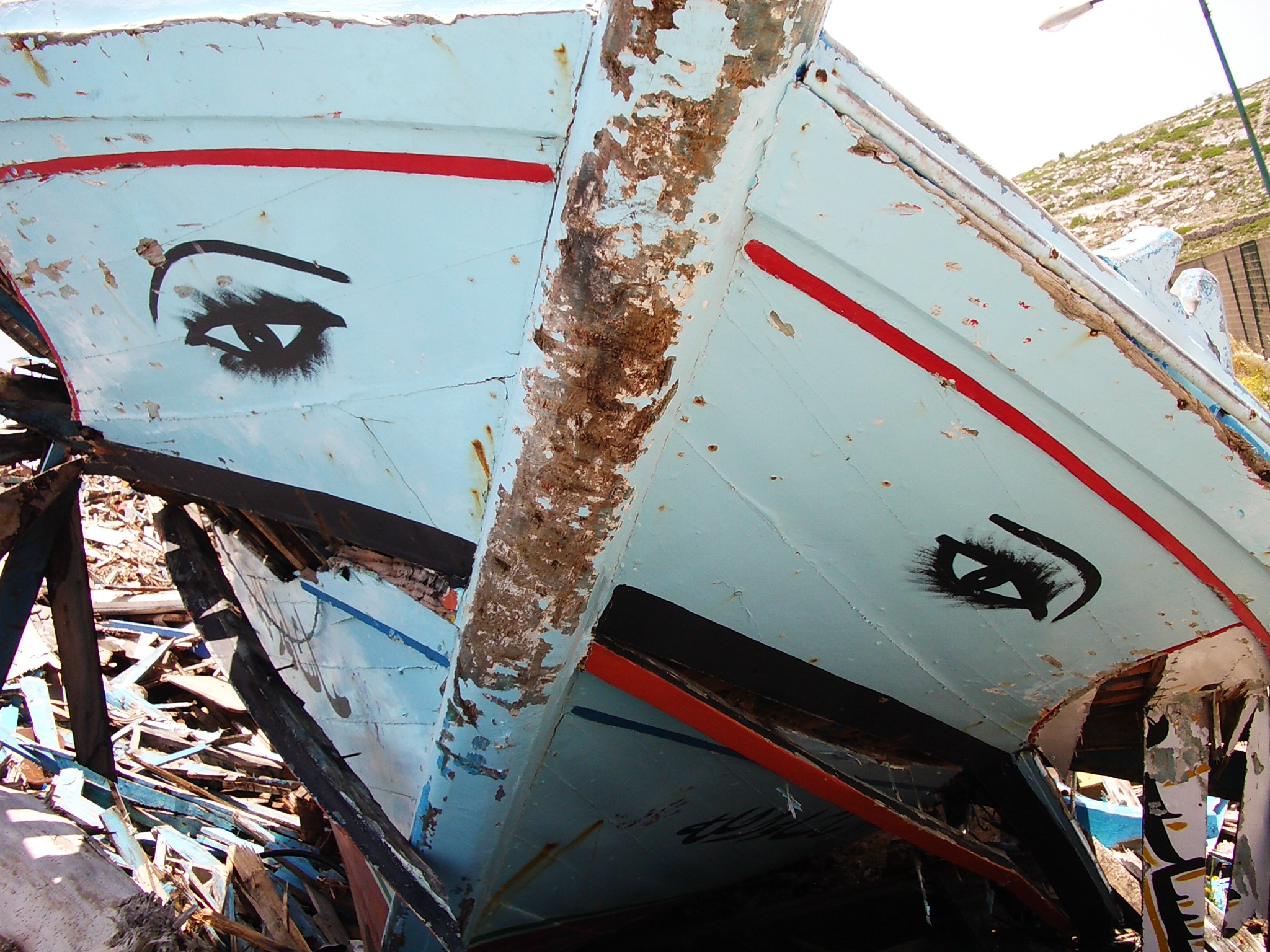 Eyes are painted on these Tunisian wooden fishing boats, as a way of warding off evil.

During the visit to Lampedusa, to gather information and meet with migrants, I met with a doctor working for Doctors Without Borders. She told me that a boat had just arrived carrying 25 people. On the island, there is a boat graveyard, where the vessels used for the dangerous crossing are collected. 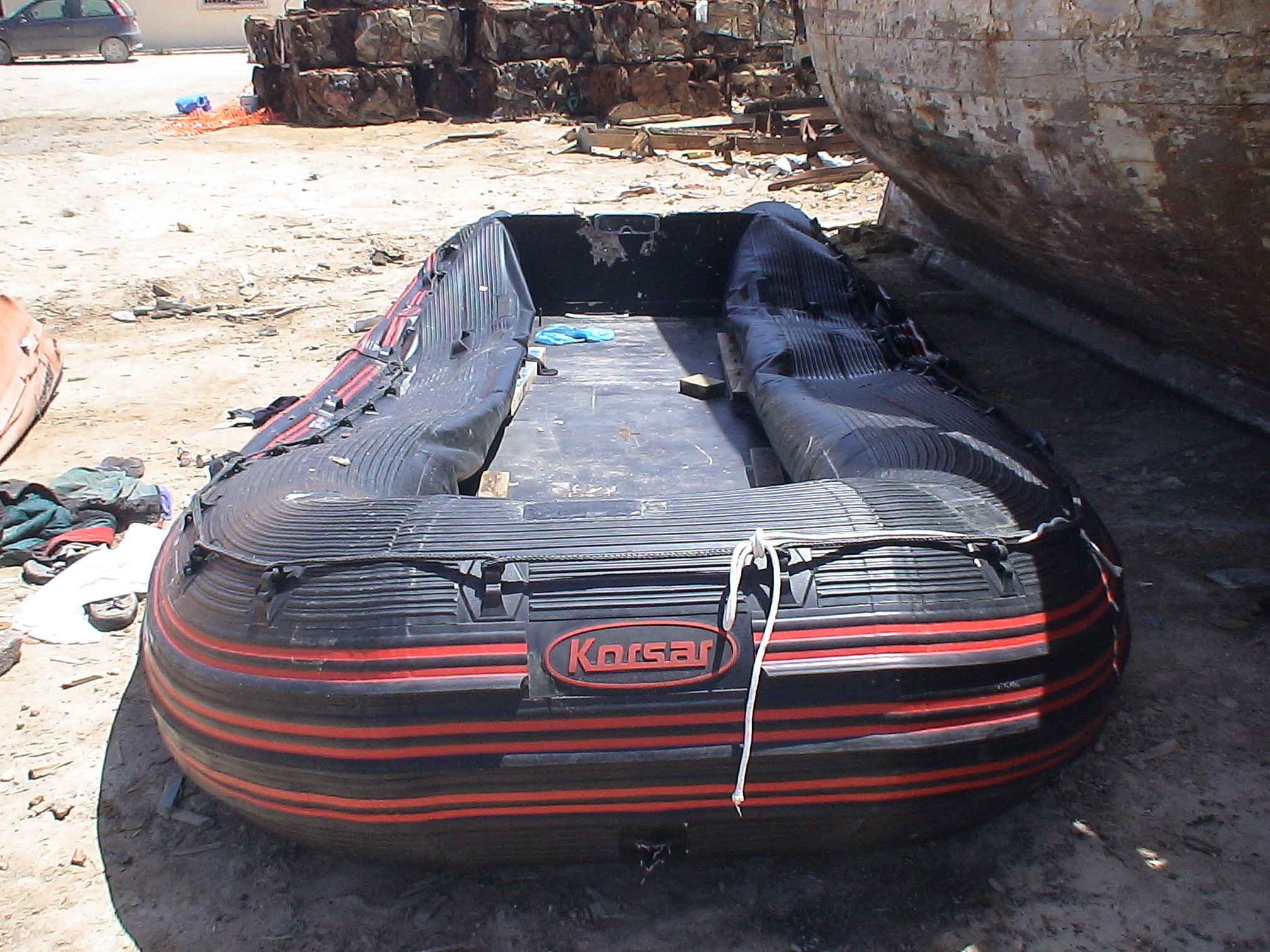 The following day, I came across the rubber boat in the boat graveyard. The craft had been extensively patched, and its bottom fixed with planks. It’s almost impossible to imagine how 25 people fit into this tiny, leaky boat. The journey takes two to three days, and many of the people on the vessel have never been on the sea before.

One man I spoke with kept referring to the sea as a river – he had come from inland Nigeria and spent time on the Niger, but had never been to the ocean before embarking on this journey to cross the Mediterranean. The boat was still half-inflated when I found it, but rapidly losing air. I made exact measurements of all its parts, and photographed it from all angles. 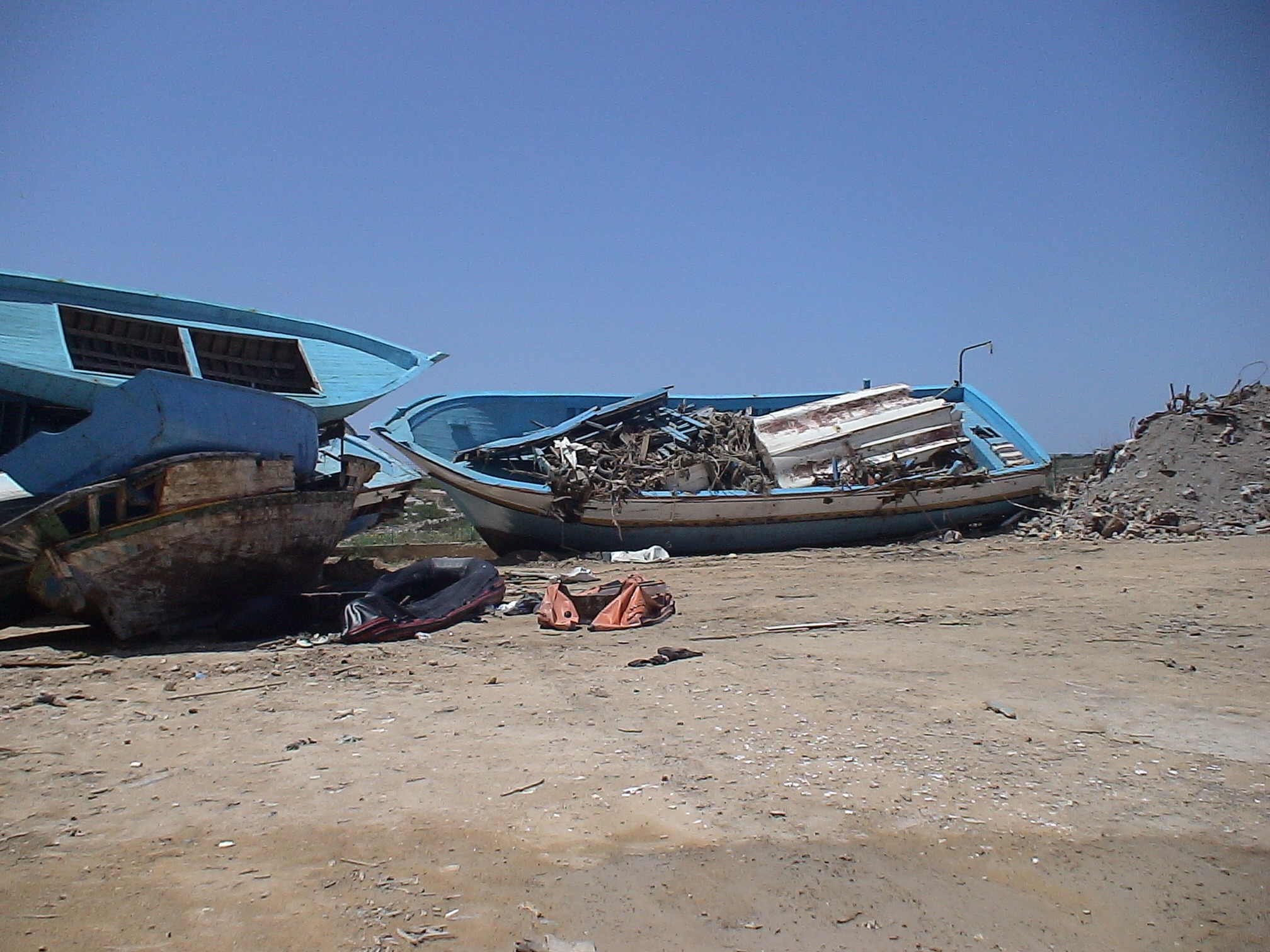 The island is very dry and has no natural spring water. Rainwater is collected in cisterns or water is brought from Sicily. When I was there in 2009, there were about 1,000 migrants on the island, held in a detention center, originally meant to hold 350 people. In the next decade, the numbers of people greatly increased, due to the political situation in North Africa, climate migration and military conflicts. 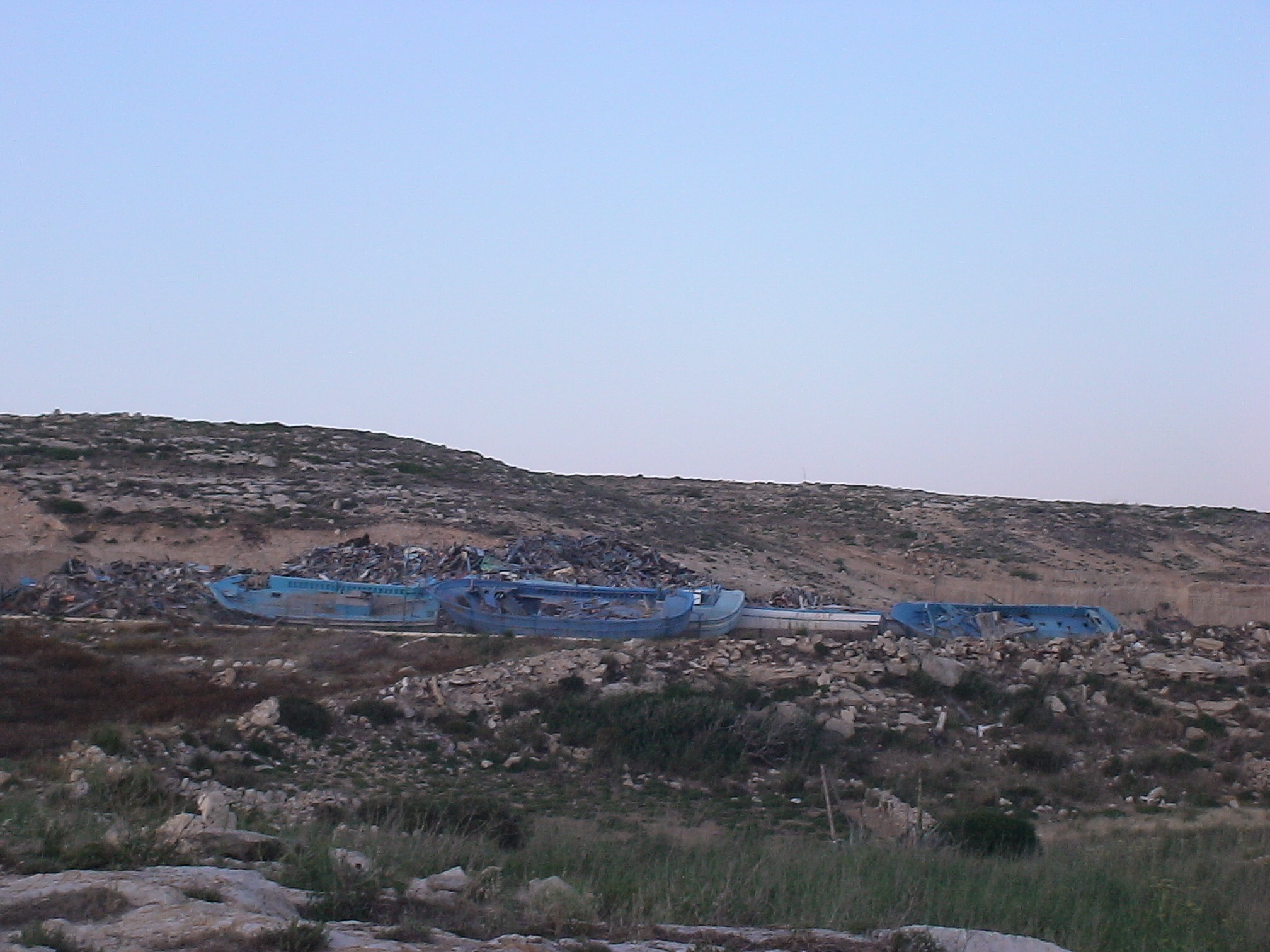 View of the boat graveyard on Lampedusa from a distance. 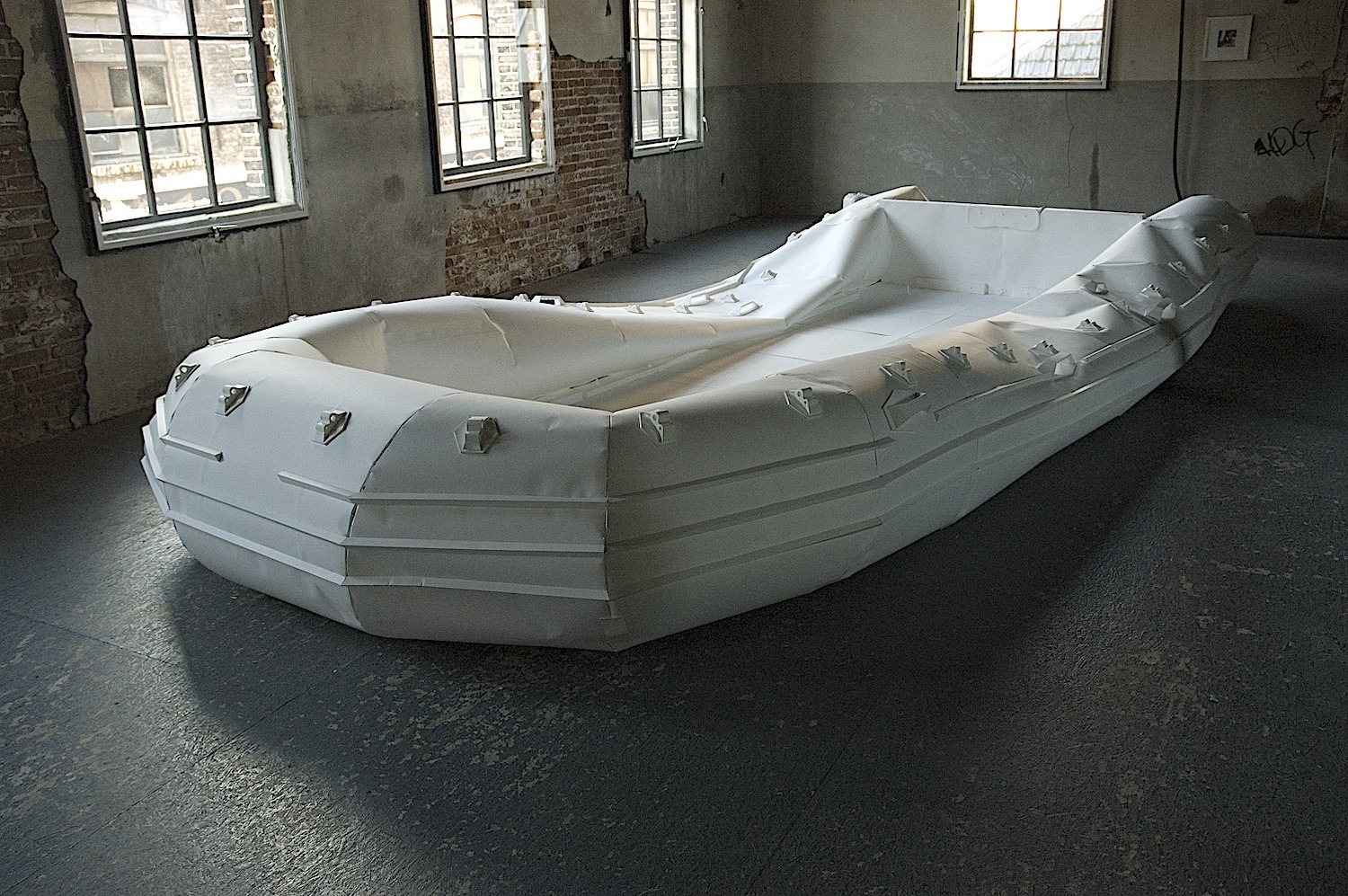 Back in Leiden I reconstructed the rubber boat as carefully as possible using paper. With the help of an intern, we worked for months on the painstaking reconstruction, with as much attention to detail as possible, down to the rubber patches on the sides of the boat, to show just how very perilous and terrifying the journey must have been.

Paper models might normally be associated with vessels connected with a glorious historic past, such as the Mayflower. In this instance, the model is used to commemorate a much less visible and more precarious history, that of those fleeing persecution and want in their own countries. 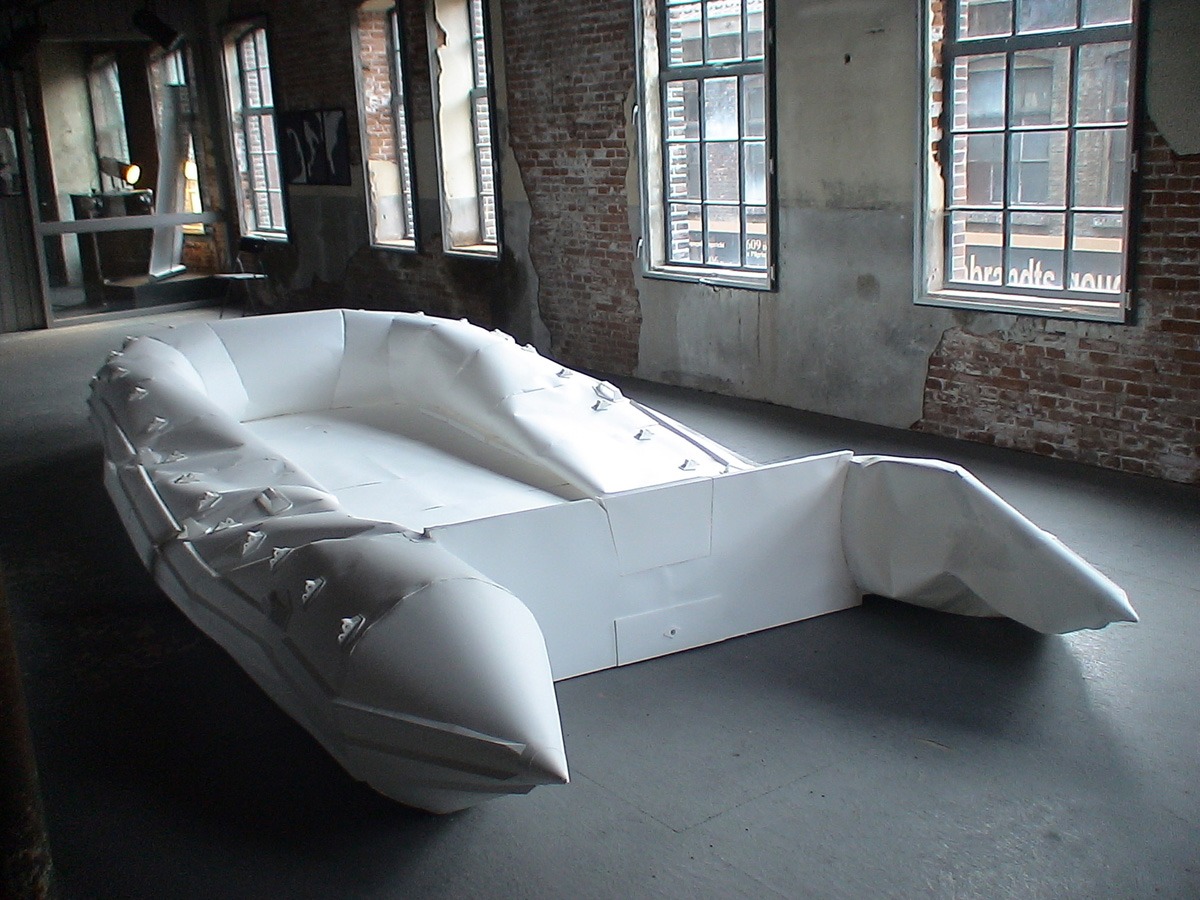 One of the most important things on the journey across the sea is the supply of fuel and water. Most of the boats have only enough supply for two to three days, the time it takes to cross the Mediterranean from Libya to Italy if everything goes well.

As part of the project at Scheltema, on July 22nd, 2009, 150 paper boats were launched into the river Vliet, on the Rapenburg in Leiden, the Netherlands, at the exact place the Pilgrims left the city on their way to America 389 years before. The flotilla consisted of 75 Zodiacs and 75 damlopers or damschuiten, transport boats used during the early 17th century.

The boats were assembled with the help of volunteers, and launched into the Vliet in the presence of a crowd of onlookers. 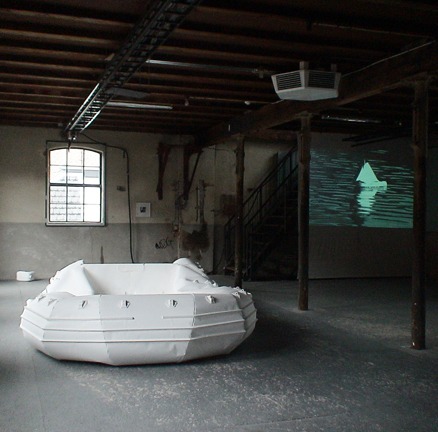 The event on the 22nd of July was filmed and became part of a video projected in the exhibition space, along with the paper model, among other works.